Get to know Bourgogne

Bourgogne takes the broad French concept of Terroir and makes it their own. Every parcel of land is named, recognising its uniqueness. This tradition of differentiation comes from the monks of the Middle Ages, who studied the vineyards that they worked on and made a record of every difference and classified them.  Many vineyards still exist today with the same classification.

Located in the east of France, along the busy A6 autoroute between Paris and the third-largest city, Lyon. Whilst famed for its wine, rural Bourgogne may have even more to offer. Medieval abbeys, Renaissance chateaux and fortified villages all stand witness to the colourful history of this lesser-known region of France. 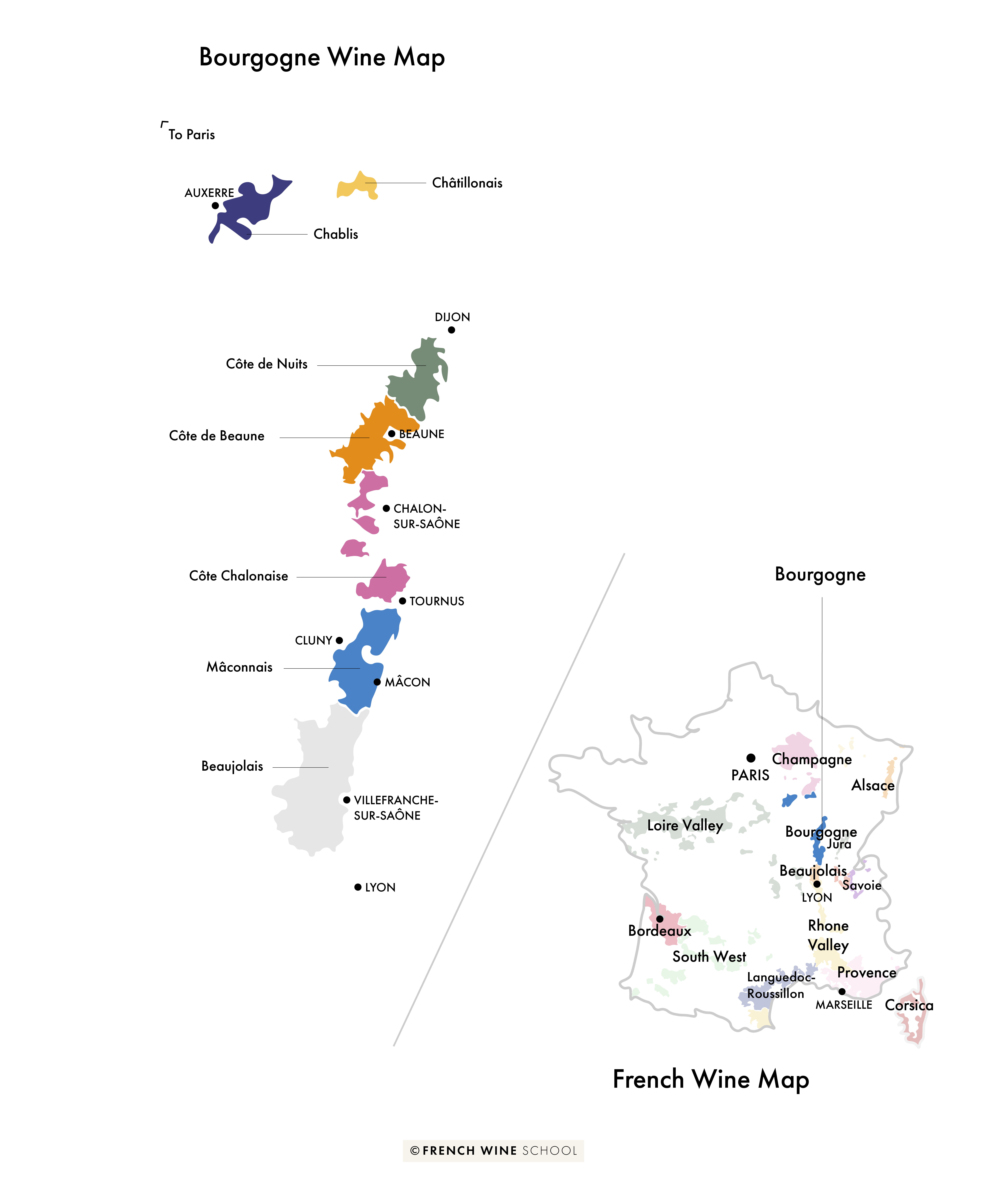 The district and quiet medieval village of Chablis, with possibly the most renowned white wines in the world is the northern gateway to Bourgogne.

While epicureans know all about the food and wines in this region, there are many other discoveries to be made. Striking architecture, beautiful rolling countryside, sweeping views, a glimpse of an ancient farming way of life or simply spiritual elevation.

In particular, the monasteries and cathedrals of northern Bourgogne are among the best-preserved examples of religious architecture in Europe, and well worth visiting.

The Côte de Nuits extends from the south of Dijon and forms the northern section of the Grands Crus wine route. It is a prestigious hillside that is home to villages bearing the names of many of the greatest red wines in the world. Here you will find 24 of the 33 grands crus in Burgundy: Chambertin, Clos de Vougeot, Romanée-Conti and many more.

The Côte de Beaune follows on from the Côte de Nuits towards the south, from Ladoix-Serrigny to the hillside of the Maranges. This soil blessed with the Chardonnay grape, is where the some of the greatest dry white wines in the world are produced.
More than one hundred signposted kilometres connecting around forty communes via the vineyards combines villages with nature, with wooded countryside, Romanesque churches and castles.

Côte Chalonnaise is located between the Côte de Beaune and the Mâconnais.

The vines grow on gentle slopes along a strip 25km wide by 7km long. Since antiquity, the trade brought about by the Romans made Chalon-sur-Saône a leading centre for trade and river transportation. After the influence of powerful abbeys during the Middle Ages, the vines enjoyed a renaissance in the 19th century, supplying table wines for consumers in the region’s mining and industrial towns.

Bordered by the Cote Challonaise to the north and Beaujolais to the south. The Macconnais region has a southern influence, with rolling landscapes interspersed with monumental cliffs. This is also the largest vineyard area within Bourgogne.

The climate is Mediterranean and is the bastion for powerful white wines. Perhaps comparison between Chablis and Macconais is the best example of why in Bourgogne they focus on terroir over the grape variety. Wine regions to visit in Bourgogne

There are 9 major AOCs across Provence, all of which boast spectacular surrounds from hilltop villages, deep valleys and coastlines. You can’t really go wrong spending time in any of these regions.

The wonderful thing about Provence is its Mediterranean climate, with relatively warm temperatures all year round. So, if you visit in the summer or winter you’ll still get a beautiful experience.

Want to learn more about Bourgogne?

Experience Bourgogne by taking an online course, attending a tasting or travelling to the region for yourself. Learn more about Bourgogne through an interactive online course Learn more about Bourgogne by travelling to the region A sun-filled region with colourful and wild landscapes.